·
By Troy Ismir
·
Under Faith and Fitness 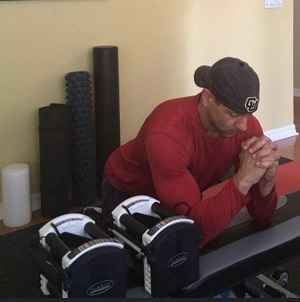 I came across the term muscular Christianity the other day when I was reading a book called Every Body Matters by Gary Thomas. Those two words put together resonated deeply with my soul.

Muscular Christianity can be defined as a Christian commitment to health, fitness and manliness. It stresses the need for energetic Christian activism in combination with an ideal of vigorous masculinity.

I would like to offer up a new way of looking at muscular Christianity. Muscular Christianity is when we show up in a way knowing we are sons of God with nothing to prove. Our self-worth is based on seeing ourselves the way God sees us.

As someone who embodies muscular Christianity, we operate from a place of being courageously vulnerable. We show up knowing we are sons of God and we are enough just as we are. We have no need to control, prove ourselves or make our lives about performance.

We live knowing our safety and security comes from our identity in Christ. This allows us to take chances on ourselves. Our heart is open and loving, focused on living a life of purpose that makes us feel fully alive.

It’s now about powering through, will-power or struggle. It comes from a deep place of knowing God is in control and we are not. That God is directing our paths in a way that honors and glorifies Him.

Our Greatest Fear is We Are Not Enough

So much of my life I have spent trying to prove myself. I have been trying to prove my worthiness in the gym, on the athletic field, on the golf course, through endurance events and in life in general out of the fear that I am not enough.

As an athlete I was recognized for my athletic feats. I was praised for my ability on the football field. As a bodybuilder I was praised for the way I looked. I always felt like I had to look or perform a certain way to prove I was worthy of people’s love. How I felt about myself was dependent on other people. It has been a constant battle of proving, achieving and performing.

I am finding out this is most men’s battle. We never feel like we are enough. The response to this constant battle is typically complacency or over-aggression. Men become passive or angry and violent.

Currently, we live in a world suffering from racial injustice, out of control violence and abuse from men, and a pandemic that has turned our health care system and economy upside down.

We are lacking leadership and direction. Instead of being united as one race, the human race, we are a nation divided into many. We have created a patriarchal culture of I am better than you because of race, gender and socioeconomic status.

Violence and patriarchy in various forms have become the status quo.

I am calling for a revolutionary change of what it means to be a Christian man in today’s world.

I am calling for Christian men to stop living from a place of quiet desperation of having to prove, control, perform and achieve.

The new possibility is we live revolutionary lives knowing we are sons of God and we are enough.

Our lives and our world will start to be transformed when men stop living our lives in an emasculated and unfulfilled state of being. When we live from a place of wholeness we will take off our masks and show up as our authentic selves.

When we look to Jesus as our role model, he was the perfect combination of what muscular Christianity looks like.

He first and foremost was compassionate. He lived his life in service to others putting others needs before His own. He spent his life hanging out with sinners.

On hearing this, Jesus said to them, “It is not the healthy who need a doctor, but the sick. I have not come to call the righteous, but sinners.” Mark 2:17

Jesus was also a warrior who was mentally strong. He spent 40 days in the desert fasting being tempted by Satan without giving in. He also overturned the tables of the money changers in the temple courts.

“It is written,” he said to them, “My house will be called a house of prayer, but you are making it a den of robbers.” Matthew 21:13

Jesus was also physically strong. It was estimated that Jesus walked just over 3,000 miles during his three-year public ministry. His estimated total amount of walking was over 20,000 miles amounting to about 20 miles per day.

When we use Jesus as our model of muscular Christianity it’s the perfect balance of power, love and self-discipline.

I climbed my first 14er the other day in Colorado. It was a very humbling experience. It revealed to me how big our God is and how he can be found in nature. In the past climbing a 14er would have been about proving myself.

In my spiritual maturity I have learned that time spent out in nature is about connecting with God, being healthy and active and enjoying camaraderie with other brothers. It isn’t about proving my self-worth as a man.

My prayer for men and our world is that we are healed from the need to prove and perform for us to feel like we are enough. That we can be a part of the solution rather than the problem.

When men start to show up as muscular Christians with Jesus as our role model we will start to transform ourselves and the world we live in.

Founder and Creator of Barbells & Brothers