By Troy Ismir
Under Faith and Fitness
10 min read

What does it mean to live with courageous conviction? It’s not easy to define, but I definitely know someone who is living that way when I see it.

I think in this world we idolize athletes too much. Many athletes are gifted with great talent, but very poor character. We see it all the time in the news where a star athlete does great things on the field and horrific things off of it.

But there are athletes and non-athletes alike who I admire and respect because they live their life with conviction and character. What is the definition of conviction?

It can be defined as a strongly held belief. Those things which you would be willing to die for.

I am going to share with you the stories of four men who I believe would die for their convictions and one of them has and the other put his life on the line for his convictions. 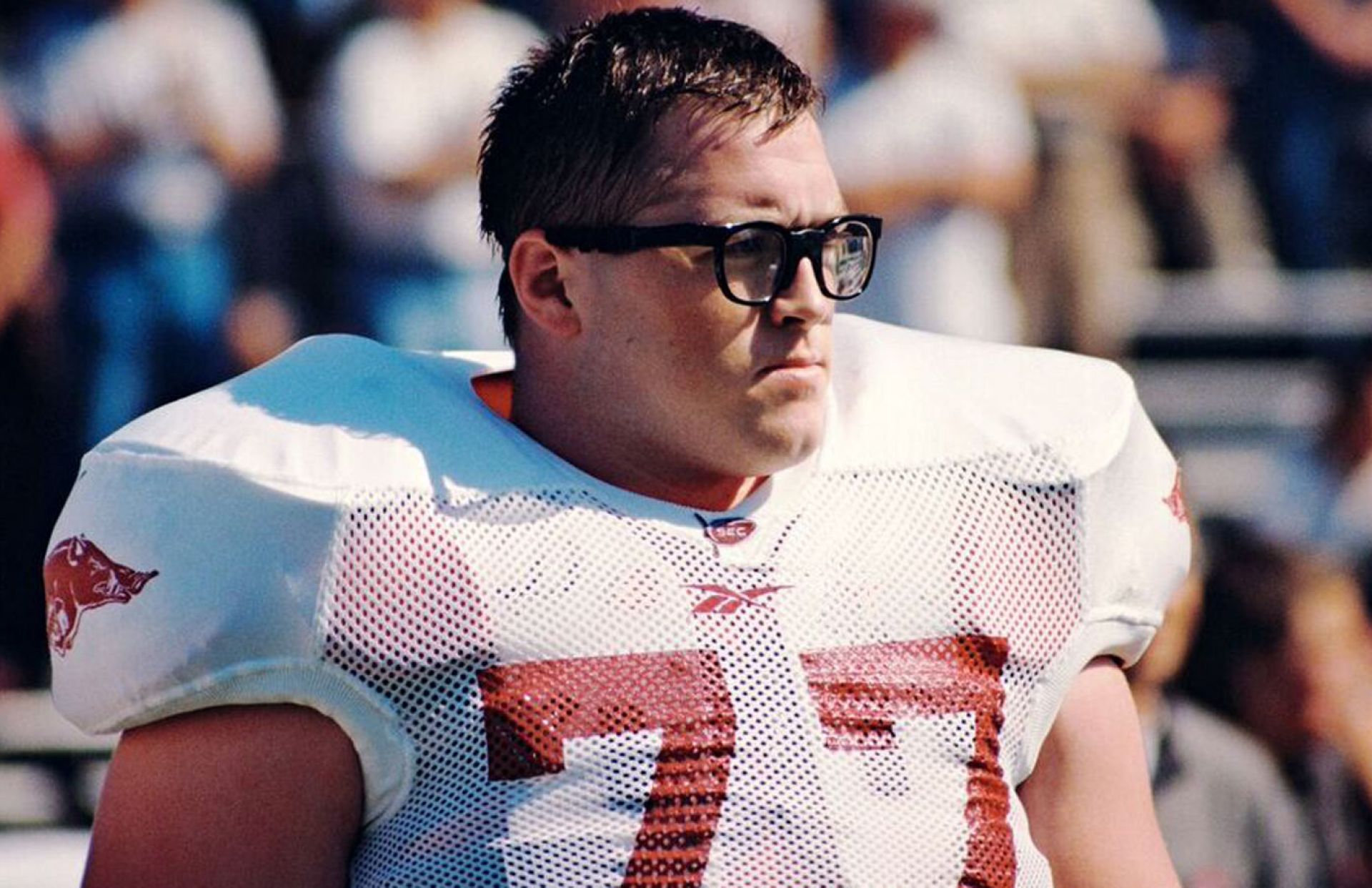 I want you to know that real men cry at movies. And this one had me crying several times. I watched the movie “Greater” the other evening. It’s the story of Brandon Burlsworth. Burlsworth was a walk-on offensive lineman at the University of Arkansas who, over the course of his career went from being an overweight out of shape freshman to a player that would end up being drafted by the Indianapolis Colts.

Burlsworth as a redshirt freshman went from a sloppy 300 pounds, lost forty pounds and then bulked back up to 300 pounds the right way and became a powerful force on the Razorback team. He was a leader off and on the field.

He was the first Arkansas Razorback football player to complete a Master’s degree before playing his final game.

BE A ROLE MODEL

It’s not the length of time we are on this earth that matters it’s what we model every day while we are alive that is most important. Brandon modeled to us if you have faith and trust in God that what seems impossible is possible.

DO THE RIGHT THING EVEN WHEN NO ONE IS LOOKING

Houston Nutt the coach at the Arkansas Razorbacks started a saying after Burlsworth death. “Do it the Burls Way.”

A saying that meant do it the right way, even when no one is looking. Brandon would get up every morning at 5:15 and work on his footwork to be the best football player he could be. He was diligent in the study of the Bible and was not swayed by anyone else’s opinion. He knew what he wanted and he went after it with all of his heart and soul.

Brandon left a legacy with his Brandon Burlsworth Foundation. This is a Christian organization whose mission is to support the physical and spiritual needs of children. In particular those children who have limited opportunities.

Tragically he was killed at the age of twenty-two in a car accident while on his way home from the University of Arkansas to attend church with his mom.

Brandon’s legacy lives on twenty one years after his death.

The next man with courageous conviction was Desmond Doss He was a young Seventh-day Adventist Christian who refused to carry a gun and had not killed a single enemy soldier during World War II. His only weapons were his Bible and his faith in God. He was the first conscientious objector to receive the esteemed Medal of Honor.

With a continual prayer on his lips, he vowed to rescue as many as possible before he either collapsed or died trying. His iron will and unstoppable courage resulted in at least 75 lives saved on May 5th, 1945, his Sabbath.

His story is told in a powerful movie, “Hacksaw Ridge.”

Desmond lived his life in a way that his first duty was to obey God. When it came to the Ten Commandments, he applied them personally. With the sixth commandment in mind, thou shalt not kill, Desmond vowed that he would never take another person’s life.

Desmond also took the fourth commandment to heart, remember the Sabbath day, and keep it holy. He asked for a weekly pass from the Army to attend church every Saturday.

EXPECT TO BE PERSECUTED

Desmond’s ways were completely different than the Army’s way and the world’s ways. He was ostracized, bullied, called awful names, cursed at and they tried to court martial him for his beliefs. No matter what they did to him, he refused to leave. His unwavering convictions were most important to him.

Desmond lived his life by this scripture Matthew 7:12. “So in everything, do to others what you would have them do to you, for this sums up the Law and the Prophets.”

Doss never held a grudge. He was there to help heal the blisters on soldiers’ feet. He was the medic by a soldier who fainted due to heat stroke offering his own canteen. He treated the soldiers who had mistreated him with kindness and compassion.

He earned the respect of the other soldiers when he was willing to risk his own life to save theirs. Desmond’s unshakeable faith and willingness to follow God no matter what the cost is an inspiration to all.

Tim Tebow is an athlete I have looked up to for a long time. I became a big fan of his while living in Orlando, Florida and watching him lead the Gators to two national championships and win the Heisman Trophy.

If I was going to admit to a man crush it would have to be on Tim Tebow.

Not only do I admire the legacy he left on the field, I admire even more what he has done off of the field. He has been a man who has lived his entire life with courageous conviction.

Tim has never been shy about sharing his faith. Tim started putting scripture on his eye black in college, a tradition he carried forward into the NFL.

Tebow said God led him to write John 3:16 under his eyes for all the world to see while he played.

After winning the national championship game he found out something pretty amazing happened during the game, 94 million people googled John 3:16.

Fast forward three years when Tim was playing for the Denver Broncos. He was still wearing the John 3:16 eye black. After defeating the Pittsburgh Steelers in a playoff game a miracle story of John 3:16 is revealed.

BE TRUE TO YOURSELF

One of the things that Tim Tebow is most known for is his personal stand against premarital sex. He was very open about this when he was a single man. It was a strongly held conviction that he never wavered on. He has been very open and often ridiculed for his choice to remain celibate while single.

Tim was true to his beliefs and never backed down on what he considered to be God’s plan for his life. He remained true to himself and eventually found a marriage partner who had the same convictions as he did with his now wife Demi-Leigh Tebow.

Tim has generously given back through his Tim Tebow Foundation. One of the things he is most known for is his passion for helping people with special needs through the Night to Shine.

Night to Shine is an unforgettable prom night experience, centered on God’s love, for people with special needs ages 14 and older. On February 7, 2020, Night to Shine celebrated its sixth anniversary. On one night, 721 churches from around the world came together to host Night to Shine for approximately 115,000 honored guests giving them an experience they will never forget.

And now we come to the ultimate model of how to live our lives with courageous conviction, Jesus Christ.

TO BE FIRST YOU MUST BE SERVANT OF ALL

Jesus came to serve and showed us what it meant to live with a servant’s heart. “For even the Son of Man did not come to be served, but to serve, and to give his life as a ransom for many.” Mark 10:45

Jesus life exuded the conviction of being a servant. Jesus performed a simple act of washing his disciples’ feet during his last few hours on earth. He was demonstrating humility and being a servant.

DO THE WILL OF THE FATHER

Jesus modeled that we are to follow God, live a life that honors Jesus and do the will of God in our own lives.

SPEND QUIET TIME WITH THE FATHER AND PRAY

Jesus found a balance between being with people and being alone in silence and solitude with his Father. “Very early in the morning, while it was still dark, Jesus got up, left the house and went off to a solitary place, where he prayed.” Mark 1:35

Jesus modeled for us how important it is for us to take time every morning to pray and spend time with our heavenly Father. It is without a doubt one of the most transformative things we can do that will change our lives.

I am inspired by these four men who lived lives of courageous conviction.

I pray daily that I can live my life with courageous conviction the way they did.

Until we are ready to die for something we aren’t really living.

To live with that level of conviction is a rare thing. It’s a work in progress for me. I know it’s possible because I have seen it through these men.

What if you lived your life with courageous conviction? What are you willing to die for?

My prayer is for every man to live with courageous conviction. That we live inspired lives of purpose feeling fully alive.

Founder and Creator of Barbells and Brothers